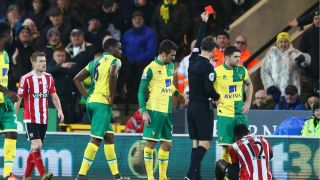 Wanyama had been sent off three minutes earlier, receiving a second yellow card when he needlessly fouled Vadis Odjidja-Ofoe.

Mane had been left out of the starting XI for turning up late for Southampton's final team meeting before the game and, after coming on in the 80th minute, failed to redeem himself by netting the equaliser.

And Koeman - whose side have now won just one of their last nine games in all competitions - said: "Sadio was one of the 11 players [scheduled] to start but we have rules in the team and he made a big mistake before the game. In our last meeting, two hours before [the game], he came late and that's impossible.

"I don't understand a player who's coming late to the last meeting and my message to Sadio two days ago was that I didn't think he was really focused and concentrated, that happened Thursday in the training session.

"[He has let down] his team-mates because we as a club like to treat everybody with respect and you have responsibilities as player to the fans, to your team-mates, to the board, to the technical staff and that's very painful."

Asked if Mane's actions were related to talk of Manchester United making an approach for him in the transfer window, Koeman replied: "Maybe. Ask him. Ask him why?

"There is no excuse. We had a great talk from our chairman yesterday about the club, about the team, about the respect, about the ambition, spirit, focus, concentration, and this happened.

"Also I'm angry about the second yellow card from Victor.

"A player with his experience needs to know, if you have a yellow already in the game, that you can't do that tackle on that position on the pitch.

"Maybe he's doing too much to resolve some problems that happened on the pitch but he has to know he can't take that risk to do that tackle."