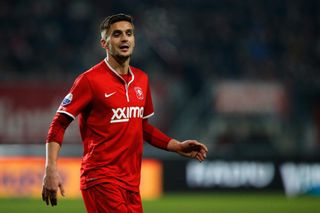 Serbia attacking midfielder Tadic moved to St Mary's Stadium from Twente on Tuesday and has signed a four-year deal with the Premier League club.

Southampton manager Koeman knows all about Tadic's qualities, having come up against the 25-year-old while he was in charge of Feyenoord.

And the former Netherlands defender is backing his first signing to provide the sort of quality that made Lallana, who joined Liverpool in a big-money move last month, such a key player at the south-coast club.

"He’s 25 and he has a great future, and I think he can now reach the level that we need and a player needs to be at in the Premier League.

"When we lost a great player in Lallana, we were looking for a similar player in that position, and we've found it.

"It's important for me, the rest of the squad and it's important for the fans because we like to continue with ambition and the philosophy of the club. It will be a great signal now to have the first new player and we look forward to bringing in some other players.

"We'd like to continue or do even more than what Southampton did last season. In that case, we need some more new players to have real competition in our squad. It's fantastic news for the rest of the players."