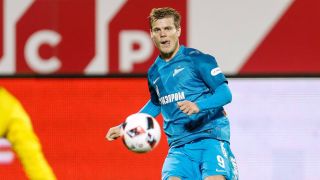 Russia internationals Aleksandr Kokorin and Pavel Mamaev were on Thursday placed on remand until December 8 after being accused of attacking a government official and a taxi driver.

The pair appeared at a pre-trial hearing in Moscow on Thursday after footage on social media appeared to show them striking Denis Pak, an official from the Ministry of Industry and Trade, with a chair in a cafe. Police also claimed the pair had earlier initiated a fight with the driver of a Russian television journalist.

The alleged incidents took place after the two friends met up in the capital after Kokorin's Zenit faced Mamaev's Krasnodar at the weekend.

Both men expressed remorse during the court hearing.

"I apologise for my outrageous actions," Kokorin was quoted as saying by TASS. Mamaev added: "I want to apologise once again publicly to the victims for my scandalous acts and I am ready to make amends for the moral and material damage suffered."

Kokorin and Mamaev will be tried for 'hooliganism' with Russian agencies reporting they could receive five-year prison sentences.

Zenit released a statement on Tuesday to announce they are considering what punishment will take against Kokorin, who missed the 2018 World Cup on home soil due to injury. Krasnodar, meanwhile, confirmed they are exploring the possibility of terminating Mamaev's deal.

An official statement from the club regarding the incident involving Alexander Kokorin October 9, 2018

Should they be dismissed by their respective clubs, the duo could be barred from playing in the Russian Premier League if a breach of contract is established, according to the competition's president, Sergey Pryadkin.

He is quoted as saying by Sport-Express: "There are certain agreements and mutual understandings between the [Russian] Premier League clubs.

"I believe that all the teams support Pryadkin's statement, I doubt that anyone will sign contracts with Kokorin and Mamaev."