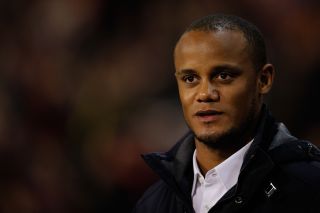 The Manchester City midfielder was the subject of the reported abuse by sections of the CSKA support during Wednesday's UEFA Champions League fixture between the two sides is Russia.

Toure made referee Ovidiu Hategan aware of the abuse, but the Group D fixture, which City won 2-1, carried on regardless, and the Ivorian called for swift action immediately after the match.

Anti-racism group Kick It Out echoed those sentiments and offered full support to Toure, and team-mate Kompany has also added his voice to those calling for CSKA to be punished.

"Racist chants again in Moscow. We've all said enough. @UEFAcom, @GovernmentRF, CSKA, all eyes are on you now. #StopRacism," he wrote on social networking site Twitter.

Everton manager Roberto Martinez voiced his disappointment over the incident and believes the issue has stolen the spotlight from a valuable victory for City.

"It is a real shame," he said. "I don't think we should be talking about these issues any more. It is important that FIFA and all the football authorities can do something about it.

"They must not let it go and accept it. It must not be another moment that can just be brushed aside.

"This is a time to make a real strong stamp on the issue of racism and make sure it doesn't happen again.

"We shouldn't see this happening season after season.

"It has been frustrating and disappointing to see that because the only thing we are speaking about is that remark, or moment, when we should be talking about a very good victory for an English club away in Russia."