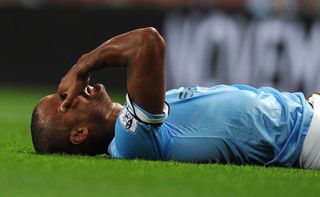 The 27-year-old has been out of action since the opening game of the season with a groin injury and his side have won just one of their three matches since.

But manager Manuel Pellegrini has revealed that the Belgium international flew out with the squad to the Czech Republic and will now face a late fitness test.

"Vincent has worked with us normally for the last two days," Pellegrini said.

"We will see if he is 100 percent. If he is, of course he will play. We will talk with the doctor and decide.

"We have a very important match but we have other players if any are not 100 per cent."

City are eager to get the campaign off to a good start after failing to make a mark in the European competition last year, bowing out in the group stage with no wins from their six matches.