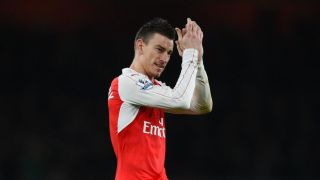 Laurent Koscielny understands the frustrations felt by Arsenal fans with the club's wait for the Premier League title set to go on, but still believes Arsene Wenger is the right man for the job at Emirates Stadium.

Sections of Arsenal's support have turned on Wenger in recent weeks, after a poor run of form saw the club crash out of the Champions League and FA Cup and slip 11 points behind league leaders Leicester City.

Arsenal have not won the Premier League since 2004 and a banner calling for Wenger to leave was seen in the away end during their 2-0 victory at Everton on Saturday.

However, centre-back Koscielny insists his long-serving fellow Frenchman – who arrived in north London in October 1996 – can cope with the criticism and take Arsenal forward.

"He's been with the club for a while now – the banners are not something new for him," he said.

"He's very calm. He knows what he has done for the club. I can understand the frustration of the fans not to have won the championship since a long time.

"We try by all means each season to lift the trophy, however, not everything is under our control. The club has to deal with injuries, periods of poor form.

"But I think the coach is still the man for the situation to help us in order maybe with a little luck to win the championship.

"There is a small chance but mathematically it's still possible, we must win all our matches."