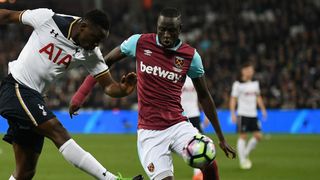 Cheikhou Kouyate played through the pain barrier to help West Ham beat Tottenham, but has now undergone surgery on a long-standing wrist injury.

The Senegal international aggravated the issue during the Africa Cup of Nations at the start of the year, but has continued to feature for the Hammers.

However, the club announced on Tuesday that, with top-flight safety assured following last week's 1-0 win over Spurs, Kouyate had gone under the knife.

"He has shown the true spirit of the Hammers by playing with this condition and given everything to the team and to the club," said the club's head of medical and sport science Stijn Vandenbroucke.

"He will be in a cast for eight weeks and we wish him all the best with his rehabilitation, with a view to him returning in good time for next season."

Kouyate, who tweeted a post-surgery picture of himself smiling and raising a thumb on his unencumbered hand, made 31 Premier League starts this term.

It's nver easy & nver over. It will be a fight renewd each morning.The pain you feel today is the strength you feel tmorrow#Alhamdulilah May 9, 2017

Vandenbroucke also said Michael Antonio is working on his recovery with a view to a return in the 2017-18 season, while Diafra Sakho had a similar aim despite suffering a setback with his lower-back problem which put paid to any hopes he had of returning this term.