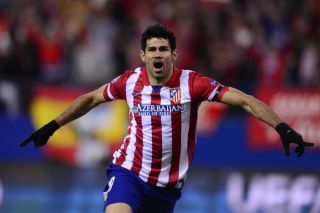 Diego Simeone's charges have moved to the summit after Real Madrid suffered two defeats in less than a week, following up their 4-3 Clasico loss to Barcelona with a 2-1 reverse at Sevilla.

Thanks to the form of traditional heavyweights Barca and Real, Atletico have done much of their good work this season as part of the chasing pack.

But placed firmly in the spotlight after recent results, they will face a difficult challenge at the fourth-placed Bilbao.

Saturday's hosts have also been in impressive form as they look to have all but nailed down the final UEFA Champions League spot.

Ernesto Valverde's side are six points clear of fifth-placed Sevilla and have lost just one of their last 12 league games.

They will have to stop Atleti hitman Diego Costa, though, who sits second behind only Real superstar Cristiano Ronaldo in the goalscoring charts with 24 Liga strikes to his name this term. The Spain international scored Atleti's second goal in their 2-0 triumph over Bilbao in the reverse fixture.

Real, meanwhile, need to arrest their form slump if they are to be in with any chance of winning the title, with Rayo Vallecano the visitors to the Bernabeu on Saturday.

Sergio Ramos will return from suspension for Real, who have seen Ronaldo score in seven successive fixtures in all competitions.

They will face a buoyant Rayo side though, with a five-match unbeaten run - including four wins - helping steer the Madrid club clear of the relegation zone.

Barcelona have scored 14 goals in their last three league fixtures but will have to do without goalkeeper Victor Valdes when they visit local rivals Espanyol on Saturday.

Valdes has played his last game for the club after suffering a serious knee injury in the club's 3-0 win over Celta Vigo on Wednesday. The shot-stopper is due to leave Camp Nou at the end of the season.

Also on Saturday, Sevilla head to Vigo in good spirits after their win over Real - their sixth Liga victory in a row - while Sunday's matches involve a host of relegation rivals.

Second-bottom Real Valladolid can move ahead of the 16th-placed Almeria with victory at Estadio Municipal Jose Zorrilla, while Getafe, who sit 18th after a nightmare run of 15 games without a win, visit Valencia.