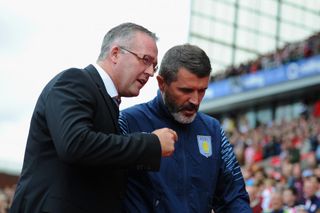 Andreas Weimann netted from inside the penalty area five minutes into the second half at the Britannia Stadium on Saturday to ensure Villa got off to a winning start for the second Premier League season in a row.

And a beaming Lambert - flanked by new assistant Roy Keane - was delighted his side managed to overcome a nervy opening to begin their season with maximum points.

"I thought we were outstanding today, I really did," he said. "I thought we deserved to win the game after the initial 10-minute period.

"I don't like singling out individuals but, as a team, the back four were outstanding.

"I thought [Aly] Cissokho, playing his first game for us, was outstanding, but I could go through every one of them.

"The whole team performance was excellent."

Lambert's number two Keane was a vociferous presence on the Villa bench, and the Scot joked that he was unable to control the former Sunderland and Ipswich Town boss.

"I'm not going to tell him to sit down," he added. "Let somebody else do that.

"Roy's been brilliant since he's been here and a massive help to myself and to the team.

"I'm pretty sure anyone that knows him or saw him play a game of football knows that he wants to win."

Asked for his reaction to Villa fans' chanting of Keane's name rather than his own, Lambert remarked: "It doesn't bother me."