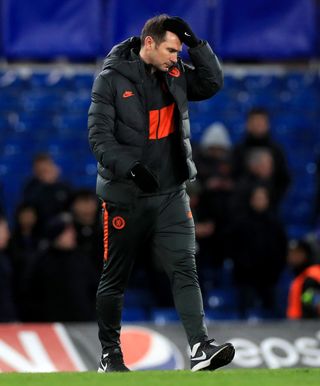 Frank Lampard admits Chelsea were given a harsh Champions League reality check by Bayern Munich and accepts pride may be the only thing at stake during the second leg.

The Blues have a mountain to climb to salvage the last-16 tie after rampant Bundesliga champions Bayern ran out deserved 3-0 winners at Stamford Bridge.

Serge Gnabry’s second-half double, followed by Robert Lewandowski’s 39th goal of the season, did the damage, while a miserable evening for the hosts was compounded the late dismissal of Marcos Alonso.

Blues head coach Lampard, who won the competition as a player by beating Bayern in the 2012 final, felt the visitors benefitted from their vast experience and recognises an early European exit could already be a formality.

“That’s football, at this level. The levels of Bayern Munich were fantastic, they’re a really strong team, I was aware of that,” he said.

“It was a harsh lesson, a reality for the players of the levels we want to get. This is Champions League football.

“We as a club I suppose haven’t been fighting in the knockout stages, getting through to the back end of it, for some years and the reality of what it takes.

“We have to go to Munich and play with a lot of pride to see what we can do there and today was just a clear show that there’s a lot of work to be done, and I felt that when I took the job, I feel that today. I will keep working and we all need to do.

“It’s pretty clear that we are in a very bad position going into the second leg, so it’s a show of character to see what we can do.”

Chelsea were fortunate to be level at the break after the German side dominated the opening period and squandered numerous chances, including striking the crossbar through Thomas Muller.

Bayern would not be kept at bay for long and former Arsenal forward Gnabry, who scored four times in a 7-2 win at Tottenham during the group stage, produced two clinical finishes in the space of three minutes to give his team control.

After assisting each of Gnabry’s strikes, in-form Poland striker Lewandowski tapped in Alphonso Davies’ centre to complete the scoring and set up a seemingly-academic return meeting on March 10 at the Allianz Arena.

Chelsea defender Alonso was then dismissed seven minutes from time after catching Lewandowski in the face with his arm.

The Spaniard was initially booked before French referee Clement Turpin upgraded his decision to a red card after watching the incident on a pitch-side monitor.

Lampard acknowledges his team fell well below the required standard and was frustrated by their failure to stick to his style of play.

“Unless we were to get everything right and bang on, it was going to be a tough night potentially,” he said.

“We didn’t get everything right. We weren’t confident on the ball, that was my biggest disappointment from mostly start to finish.”

Chelsea midfielder Jorginho will join Alonso on the suspended list for the second leg after picking up a needless yellow card for dissent.

Substitute striker Tammy Abraham appeared to pull up injured while warming up, although Lampard said he was not aware of that.

Bayern manager Hans-Dieter Flick was delighted by the emphatic victory and that star man Gnabry – who moved to Bavaria via a short spell with Werder Bremen – was allowed to leave the Gunners in 2016.

“I’ve known Gnabry quite a long time. I saw how he played at Arsenal and I was very intensive the way I followed his career and also when he played for the national team and you could just tell what he could do,” said Flick.

He added: “Of course it was a really good result for us. The team performed exactly as we had planned.

“We were very concentrated, very focused to the way we played, and that’s the reason why we could win 3-0.”