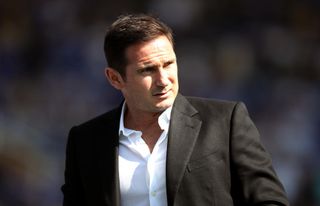 Frank Lampard was proud of Derby’s players after leading them into the Sky Bet Championship play-offs with a 3-1 win over West Brom at Pride Park.

The Rams – who knew victory would secure a top-six finish – had to rally in the second half after Stefan Johansen cancelled out Martyn Waghorn’s opener.

With Middlesbrough winning, it looked as though Lampard’s side had squandered their chance of promotion, but Mason Bennett and Harry Wilson struck in quick succession to set-up a two-legged clash with Leeds.

“A little bit of relief but more elation,” Lampard said when asked how he felt.

“In the context of there’s work to be done and we haven’t won anything.

“Pride is probably the main emotion, to see the team play from 1-1 onwards, with the quality and the work rate and the calm nature to play the football we played.

“When we got our noses in front we kept moving the ball, it was brilliant.”

While the Rams finished the season with a six-match unbeaten run, Leeds picked up just one point from their final four outings.

However, Lampard warned against reading too much into recent form.

“We need to try and carry that momentum – we’ll be underdogs because we came sixth. There’s a reason we’ve finished points behind Leeds, Villa and West Brom,” he said.

“The run-in has been good for us, so let’s go into it with no fear and try and upset a few people.

“I’ll plan to play the Leeds side that have been really strong all season.

“The cup atmosphere the play-offs bring can throw recent form out.

“I won’t plan that they’re in bad form, I’ll plan for Leeds who beat us well and looked at Christmas like they were going to win the league.”

Derby made a nervy start and might have fallen behind when Jacob Murphy skewed his effort wide from 12 yards.

Waghorn calmed the nerves of the home fans after 19 minutes when he headed Jayden Bogle’s fine cross into the bottom corner.

Dwight Gayle inexplicably fired wide from eight yards and Ahmed Hegazi headed a Johansen corner over from six yards out, but just two minutes after half-time the visitors did draw level.

Rodriguez played the ball in and Johansen powered a left-footed effort into the far corner from 12 yards.

The Rams restored their advantage 20 minutes from time when Nugent’s clever backheel played in Tom Lawrence, and his effort deflected into the path of Bennett to apply the finish.

Wilson added a third from the penalty spot after 72 minutes when Kyle Bartley brought down Lawrence in the area.

Nugent was denied by Johnstone as the home side threatened to run riot, before Robson-Kanu saw red for needlessly lashing out at Bradley Johnson – ruling the Wales forward out of the play-offs.

The visitors were already assured of a play-off spot and will face rivals Aston Villa for a place at Wembley.

Caretaker West Brom boss James Shan was disappointed with his side’s response to falling behind for a second time.

“After they scored the third our level of application and work ethic was not acceptable,” he said.

“However we dress up what’s happened today, it’s not the business end.

“There were some honest assessments from the players in there. There’s no excuse now.