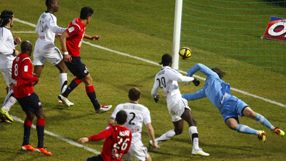 Rudi Garcia's pacesetting side have 52 points from 27 games, with Olympique Lyon and Marseille four points off the pace in third and fourth respectively.

"We had possession but failed to create a lot of chances," said Hazard, voted the best prospect in Ligue 1 in 2009 and 2010.

"There are still 11 games left and we take nothing for granted," he told the Foot Plus TV channel. "Let's try and grab as many points as we can as our rivals will finish strongly." Paris Saint-Germain were held to a 2-2 home draw by 10-man Montpellier.

PSG were 2-0 up after 14 minutes thanks to Guillaume Hoarau's header and an own goal by defender Mapou Yanga-Mbiwa.

The visitors hit back when Olivier Giroud headed in a free-kick in the 47th minute. Midfielder Cyril Jeunechamp then picked up a second yellow card a minute later and PSG appeared set for the win.

Giroud, though, equalised against the run of play with a clinical strike from inside the box just before the hour.

The result left PSG in fifth place with 45 points, seven behind Lille.

At their Stadium Nord in Villeneuve d'Ascq, Lille took the lead after 39 minutes when Ligue 1's leading goalscorer, Moussa Sow, netted his 18th of the season with a 20-metre shot that went into the top corner after taking a deflection off Milan Bisevac's leg.

Valenciennes looked transformed after the break and Gregory Pujol levelled with an angled shot just before the hour.

Lille were short of pace in midfield in the absence of the suspended Florent Balmont but Hazard made the difference.

Also on Sunday, Monaco moved away from the relegation zone after a first-half Adriano goal gave them a 1-0 win at Girondins Bordeaux who are eighth.

Monaco, in 17th spot, have 29 points and lead 18th-placed Auxerre on goal difference.