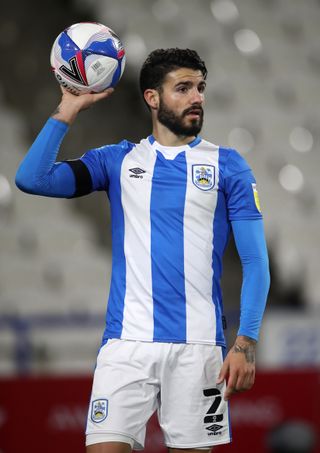 An agonising own goal by Rotherham’s Angus MacDonald in stoppage time allowed Huddersfield to snatch a point in a drab Yorkshire derby.

Rotherham had looked like they were going to maintain their solid start to life back in the Championship until Spanish youth international Pipa’s effort in the sixth minute of added time, which struck MacDonald, made the score 1-1.

The game was played out in heavy rain and both sides found it hard going in a match of poor quality and few big chances.

Angus MacDonald’s alertness prevented an early Huddersfield goal as the centre-back was on hand to dive in front of Fraizer Campbell’s shot from Isaac Mbenza’s cutback.

Huddersfield goalkeeper Ben Hamer had been untested throughout the first half an hour – but was picking the ball out of his net after 33 minutes.

Academy product Ben Wiles was given too much space 25 yards out and he took advantage by firing an unstoppable drive into the bottom corner.

Rotherham searched for a second before the break and Freddie Ladapo came close after darting down the right and forcing Hamer into tipping over.

The visitors were pushing to get level but powerful shots from Mbenza and Carel Eiting were both blocked as Rotherham’s defence put their bodies on the line to stay in the lead.

Juninho Bacuna was also left frustrated by a selfless and brave block after the ball fell to him kindly from a corner.

Koroma, who had been with the Millers as last season’s League One campaign was cut short, looked like Huddersfield’s best outlet for a goal and he fired just wide again after cutting in from the left flank and shooting from the edge of the box.

The away side crafted a great opportunity with skipper Jonathan Hogg sliding in Pipa but he was denied at the near post by a strong save from goalkeeper Jamal Blackman.

Rotherham had to see out six minutes of added on time and had a scare with substitute Adama Diakhaby heading wide from Toffolo’s centre.

As they entered the final minute, Pipa’s effort was diverted in off the unlucky Angus MacDonald to earn the visitors a point.