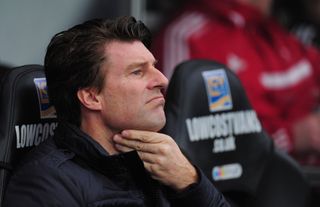 Laudrup saw Swansea's winless run in the top flight stretch to eight matches with a 3-1 defeat on Sunday, as Emmanuel Adebayor scored either side of Chico Flores' own goal.

Wilfried Bony's late strike proved no more than a consolation and Swansea remain three points above the relegation zone.

The Welsh club's next three league matches are all against sides in the bottom four - Fulham, West Ham and Cardiff City - with Laudrup highlighting the visit of Rene Meulensteen's side as a game Swansea "need to win".

"We started well in the first half hour. We had a great attitude and put them (Tottenham) under pressure. We had some good chances and the strike from Bony hit the bar," said the Dane.

"The first time they have a shot on target they score - it is something that happens when you are struggling.

"We have to admit we have some problems right now. On the other hand, we have to continue like this. We need a win.

"The next four league games are against direct opponents. We play in the FA Cup next (against Championship side Birmingham City) then it is a game against Fulham, which is a game we want and need to win."

Swansea have won only twice at home in the top flight this season and sit 15th in the table.