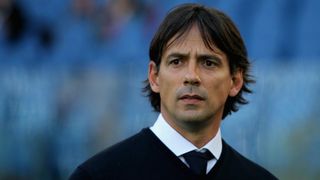 Lazio boss Simone Inzaghi insists the fans can put their faith in him despite the controversy surrounding his appointment.

The former striker, who had been coach of the Primavera side, took charge of the first team following the dismissal of Stefano Pioli in April.

Inzaghi had been informed that Marcelo Bielsa would be taking over as head coach for 2016-17, but the Argentine sensationally pulled out of the deal this week, accusing the club of failing to adhere to agreements in player recruitment.

A solicitor for Lazio branded Bielsa's actions "unjustifiable", with the capital club expected to pursue legal action against the former Athletic Bilbao boss.

Inzaghi, meanwhile, has been put back in charge after a deal to take over at Salernitana – a club owned by Lazio president Claudio Lotito – was put aside.

And the former Italy international is confident he is the right man to deliver results on the pitch following a turbulent few days.

"It all happened suddenly," he said on Saturday. "Last season, I thought that I would stay, but then the club informed me they wanted to make a change. At the same time, Lotito informed me of a new option.

"When it was all ready, problems emerged and the club told me to wait, but I wasn't waiting for just any club – I was waiting for Lazio, the team I support and where I grew up.

"Lazio are counting on me. I know the work that's ahead, but I am confident because I know the lads and we have a strong understanding. I know they are with me and the club will help me in this journey.

"There could be some grumbling among fans and media, but the supporters I meet know that I am a Lazio fan as well and they can trust me. We have everything it takes to do well."

Sporting director Igli Tare added: "The choice was made because Inzaghi is part of the Lazio family and is a coach we have always believed in.

"We had agreed that Simone would continue as part of our rapport with Salernitana."