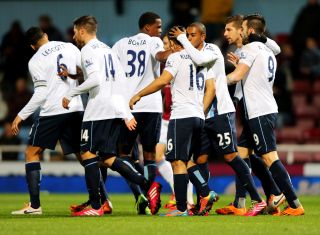 Ruthless City were already all-but assured of a place in the final against either arch-rivals Manchester United or Sunderland on March 2 after thrashing Sam Allardyce's side 6-0 in the first leg at the Etihad Stadium.

And the Premier League title contenders heaped more misery on the struggling London club, Negredo striking a goal in each half at Upton Park to take his tally to 23 goals for the season as Manuel Pellegrini's claimed the most emphatic semi-final victory in the League Cup.

The in-form Spain striker, who scored a hat-trick in the first leg, now boasts nine goals in his last six games and his strike partner Sergio Aguero scored his 22nd goal of the campaign in the first half as West Ham were made to pay for more abysmal defending.

West Ham have now lost five of their last six games in all competitions, while City can look forward to their first appearance in a League Cup final since 1976.

In front of a crowd of only 14,390, Aguero made his first start for over a month as Manuel Pellegrini made eight changes to the City side that beat Cardiff City on Saturday.

Andy Carroll was in the West Ham starting line-up for the first time this season and Kevin Nolan returned from suspension as Sam Allardyce also rung the changes.

West Ham were made to pay for some terrible defending in the first leg and had seemingly failed to learn their lesson as City took the lead all too easily after just two minutes.

Gael Clichy was afforded too much time and space to deliver a cross from the left and Negredo headed in after being left unmarked by James Tomkins.

The West Ham faithful voiced their disapproval and worse was to follow 23 minutes in, when Aguero caused panic in the West Ham defence and coolly slotted home with his left foot after teenager Marcos Lopes had been allowed to advance from midfield.

Carroll was replaced by Carlton Cole at the break after a frustrating first half, while referee Chris Foy waved play on three minutes after the break when Ravel Morrison tumbled in the penalty area.

Cole forced a save out of Costel Pantilimon just five minutes after coming on when he escaped two defenders and was then denied by the City goalkeeper at his near post.

But it appeared to be only a matter of time before the visitors increased their lead and Negredo cashed in on West Ham's defensive frailties after 59 minutes, bursting into the box unchallenged then dinking the ball over Jussi Jaaskelainen from a tight angle with his left foot.

Stevan Jovetic made his first appearance since October when he replaced Aguero after 64 minutes.

West Ham were unable to cope with City's attacking threat and Jesus Navas should have added a fourth goal 15 minutes from time, but the winger fired high over the crossbar.

The hosts' misery was compounded late on when Mohamed Diame was taken off on a stretcher having been injured.