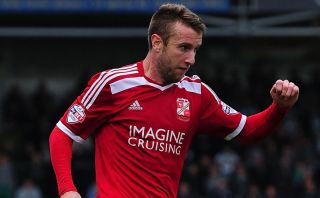 Swindon's top scorer trails just Chesterfield's Eoin Doyle in the English third tier's scoring charts this term and proved the Wiltshire club's inspiration with his 16th and 17th league goals of the season as they strolled to success at the Ricoh Arena.

He had a second in the 18th minute as Frank Nouble bundled Louis Thompson over in the penalty area and Williams made no mistake from 12 yards.

Swindon are without two of their key players - Australian Massimo Luongo and Iraq's Yaser Kasim - due to the Asian Cup but they showed no signs of missing the midfield duo as chances kept coming, Matt Smith wasting a gilt-edged opening.

Coventry rarely threatened Swindon keeper Wes Foderingham and the visitors added gloss with nine minutes of normal time to play, substitute Jonathan Obika rounding Allsop with his first touch of the match before rolling into the net.

Victory lifts Swindon above Bristol City at the summit on goal difference, though Mark Cooper's men have played a game more.