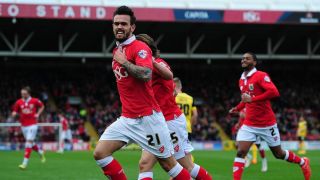 Steve Cotterill's side are unbeaten in their last 10 matches as they have opened up an eight-point cushion at the top of the table.

Extending that run at Deepdale would leave Bristol City on the verge of promotion, as well as also presenting the chance to win the title next weekend.

However, it is far from certain given Preston are also in fine form and still harbour dreams of overtaking their visitors in the closing weeks of the campaign.

In order for Bristol City to be celebrating on Saturday, Cotterill's men also need other results to go their way, requiring MK Dons to lose away at Port Vale and Swindon Town not to win when they host Peterborough United.

Sheffield United – who travel to Oldham Athletic – and Chesterfield – who visit Barnsley – currently occupy the remaining places in the top six, with Rochdale and Fleetwood Town making a late push behind them.

Keith Hill's Rochdale are four points behind Chesterfield ahead of their clash with Doncaster Rovers, but they will need a change in form away from home to stay in touch – having only won once in the last eight games on the road.

Unbeaten in their last four, Fleetwood are at Walsall this weekend with Graham Alexander looking to keep the dream of back-to-back promotions alive.

The top of the table does not have a monopoly on the excitement in League One, though, with the battle to stay in the division set to go down to the wire.

Yeovil Town look doomed after six successive defeats, are rooted to the foot of the table and will be relegated if they lose to Notts County in Paul Sturrock's first game in charge.

Notts County are also in trouble sitting in 22nd place, but could jump out of the danger zone with all three points – should other results go their way – whereas defeat could immediately pile pressure on new manager Ricardo Moniz.

Two other sides battling to avoid the drop meet at Gresty Road as Crewe Alexandra entertain Leyton Orient with goal difference separating them prior to kick-off.

A win for Colchester United at Coventry City could see them move out of the bottom four and drag their hosts deeper into the mire, while Scunthorpe United and Crawley Town both need points to stay out of trouble.