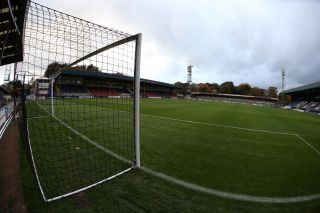 Scunthorpe looked in danger of being replaced by their visitors at the top of League Two when Steven Schumacher stepped up to take the second-half spot-kick, but Slocombe went full stretch to earn his side a share of the spoils.

Fleetwood, who missed the chance to make it five league wins in a row and return to the summit, had the better of the game but could not avenge October's 1-0 home loss against United.

The hosts faded after a bright start and were fortunate not to fall behind before the interval as efforts from Mark Roberts, Conor McLaughlin and David Ball all threatened to break the deadlock.

With the pattern of play set firmly in the visitors' favour, it looked to be merely a matter of time before Town got the opener.

And they were handed a glorious opportunity to do just that when Charlie Taylor was fouled by Terry Hawkridge in the box just past the hour mark.

But Schumacher, who scored two penalties against Newport County in November, was denied his fifth goal of the campaign as Slocombe made a fine stop down to his right.

The draw, Scunthorpe's third in a row, extends their unbeaten run in the league to 12 matches.