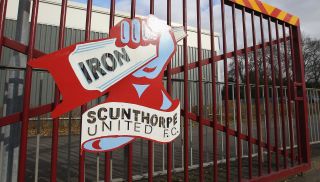 Keith Hill's team would have reached the summit themselves with a third consecutive victory but David Sayers' 58th-minute opener and a late Sam Winnall brace sealed the points for the hosts after Rochdale had Michael Rose sent off for two bookable offences.

The match at Sixfields was one of four to fall foul of the weather along with Bristol Rovers versus Cheltenham Town, Newport County versus Oxford United and Exeter City versus Wycombe Wanderers.

Southend United are now level on points with Chesterfield, moving into fourth courtesy of a 2-1 comeback win at home to Portsmouth.

Sonny Bradley converted Ashley Harris' corner to give Portsmouth a deserved lead but they ultimately fell foul of goals at the end of each half by Ryan Leonard.

Fleetwood Town returned to the play-off places as they ended a run of three consecutive defeats with a 3-1 triumph over Accrington Stanley in the Lancashire derby at Highbury.

Second-bottom Torquay United were unable to capitalise on Accrington's defeat and Bristol Rovers' afternoon off as they lost 2-0 at Plymouth Argyle – forward duo Caolan Lavery and Lewis Alessandra scoring after the break.

Bury romped to their second away win of the season 3-0 against Hartlepool United, while Dagenham and Redbridge and York City were 1-0 home victors over AFC Wimbledon and Morecambe respectively.