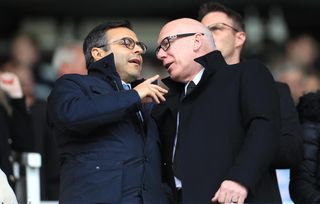 Radrizzani did meet this week with Al-Khelaifi, who is a good friend and associate of the Italian and also president of PSG, but no concrete negotiations over possible investment in Leeds took place.

Leeds have been approached by half a dozen interested parties this summer and Radrizzani would consider the right investment offer.

A possible future partnership with QSI has not been ruled out, but the club is not for sale.

Radrizzani made clear his intentions to “have another go” at promotion when Leeds announced last week that Marcelo Bielsa had agreed to extend his contract for a further season.

QSI, funded by the oil-rich state of Qatar, completed their takeover of French champions PSG in 2011 and have transformed them into one of the world’s wealthiest clubs.

PSG signed Neymar from Barcelona for a world record £200million fee in 2017 and Kylian Mbappe has since joined from Monaco for £166m.

Al-Khelaifi, the boss of Qatari TV channel BeIN Sports, and Radrizzani have been friends for several years after negotiating television rights deals when the Italian owned sports media agency MP & Silva, which he co-founded and has since sold.

QSI have reportedly been interested in buying a stake in an English club for several months, while Leeds sold a reported 11 per cent stake to 49ers Enterprises, the investment arm of American football franchise the San Francisco 49ers, in May last year.

It is also understood Leeds have had several enquires for teenage winger Jack Clarke, but have not received any firm offers.

Clarke, 18, burst on to the scene in the Championship this season with several eye-catching performances and Tottenham, it has been reported, are ready to make an offer in the region of £20million.

Meanwhile, Leeds have confirmed chief executive officer Angus Kinnear’s appointment as the independent chairman of the board for British Weight Lifting will have no impact on his role at Elland Road.