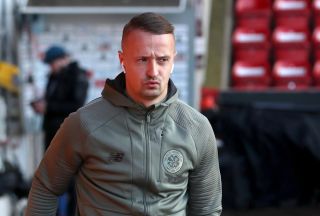 Celtic boss Neil Lennon will have to do without Leigh Griffiths after the striker picked up an injury ahead of the Europa League clash with FC Copenhagen on Thursday night.

The Scotland attacker and defender Greg Taylor did not travel to Denmark for the first leg of the last-32 clash, nor did longer-term injured defender Hatem Abd Elhamed.

As a partner to Odsonne Edouard, Griffiths has been key to the 3-5-2 formation that Lennon has preferred to the 4-2-3-1 since the start of 2020, which has brought nine wins out of nine in all competitions.

“I’m hoping the latter two will be fit for the weekend.

“We can use both systems, we are comfortable with both and we have a fair idea of how we want to play tomorrow.

“I expect a difficult game, tactically they are smart. We are in good form, confidence is good. I am not taking anything for granted but we are looking forward to the game.

“The stadium is magnificent, I have just been out looking at it, the pitch has been re-laid and looks good and the players will get very excited about the game when they get here.

“I touched on a couple of injuries but I have a good complement of players here as well.

“Confidence is good but obviously we are not taking anything for granted in terms of Copenhagen.

“They are a strong team and they are difficult to beat.”