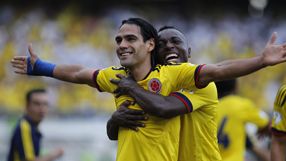 Colombia, who have won their last three qualifiers, went top of the South American group at least until the end of Argentina's home match with Uruguay later on Friday.

The Colombians have 16 points from eight matches, the same as Ecuador who beat Chile 3-1 at home, while Argentina have 14 from seven.

Falcao put Colombia ahead seven minutes into the second half when he took a through ball from Macnelly Torres, turned defender Paulo Da Silva and curled a left-footed shot inside the corner of Diego Barreto's goal.

The Colombians, patient against a defensive Paraguay in a goalless first half, wore down their opponents in the second after two substitutions by Argentine coach Jose Pekerman.

Pekerman moved James Rodriguez from the flank into a central playmaking role and sent on lanky, fast-running midfielder Juan Cuadrado for Aldo Ramirez.

Passage through the midfield became faster and Paraguay were put on the back foot, surviving a string of Colombian chances.

Paraguay, bottom of the nine-nation South American group, missed their best chance midway through the second half when Marcelo Estigarribia shot just wide after a good counter-attack down the right by substitute Luis Caballero.

Falcao rounded off a fine victory with his fifth goal in three qualifiers when he controlled a cross from substitute Elkin Soto on his right foot, sent Barreto the wrong way and lobbed the ball home with his left in the final minute.

"Let's enjoy this victory but... there's still a long way to go in the qualifiers and we haven't achieved anything yet," Falcao told reporters.