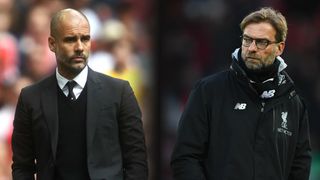 Jurgen Klopp says Liverpool's fine record against the top sides relies on a "100 per cent performance" as he expects a tough test against Manchester City.

The Reds were unbeaten in 10 meetings against fellow top-six teams last season, drawing five and winning five, before continuing that run with a 4-0 demolition of Arsenal before the international break.

A trip to Pep Guardiola's City is up next on Saturday and Klopp believes it will be Liverpool's "most intense" game at a tricky time of the season.

"What is the secret [against the top sides]? Hard work, a plan against them, luck in the right moments - a few things," he told a pre-match news conference.

"But, always, a 100 per cent performance. If you show weaknesses in a game like this, these teams will use them. It's clear that you have to be ready for the different situations in the game.

Klopp on facing Man City: "Both teams are strong on the counter-attack. It's a really interesting game." September 8, 2017

"City is probably the most intense game to play in. Without the maximum attitude to really work, you have no chance. They play too much football.

"And you have to hope that they don't score - that's not about what we do.

"It's not that easy to play against City at this time because they've played different systems - which is what Pep is always doing, but not always so different.

"They have the same real problem that we have - they have had just one real session to prepare for the game against us. That's a real challenge.

"We have a session today [Friday] to try our best to be prepared. The players come from all over the world and had different roles in different systems."