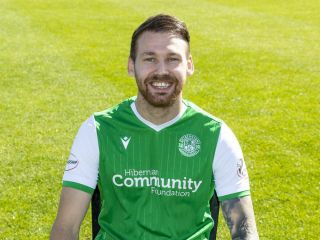 Martin Boyle enjoyed a fairytale return from injury to spare Hibernian’s blushes in a breathless 2-2 draw against Livingston.

The Lions raced into a two-goal lead courtesy of a double salvo on the cusp of half-time, with Steven Lawless and Craig Sibbald finding the net.

Scott Allan halved arrears from the penalty spot before Livi substitute Scott Tiffoney blew a golden opportunity to put the game to bed, firing wide of an empty net after rounding Chris Maxwell.

And Boyle, climbing from the bench following four months on the sidelines with a serious knee injury, restored parity in stoppage time to secure a fifth draw in a row for Hibs.

Hibernian have still not won a league match since a 1-0 triumph over St Mirren on the opening day of the campaign and left the field to widespread jeers, with their American-based owner Ron Gordon in the director’s box.

The home side almost fell behind with less than two minutes on the clock when Scott Pittman beat Maxwell with a low drive, only for Thomas James to make a dramatic goal-line clearance.

Livingston winger Lawless then fizzed a shot narrowly wide after corner kick was only half cleared.

Livi goalkeeper Matija Sarkic was called into action for the first time when Glenn Middleton met a knock-down from the towering Christian Doidge, with the Aston Villa loanee parrying the winger’s effort to safety.

Hibs gradually found their groove and Sarkic was forced to make another sharp save to deny Allan before Alan Lithgow cleared a Daryl Horgan effort off the line.

Sarkic, celebrating his maiden call-up for the full Montenegro squad for upcoming games against England and Belarus, then illustrated his promise by denying a thunderous James drive from distance.

Livingston grabbed the lead seven minutes before half-time when Lawless was afforded too much space on the edge of the box to fire beyond Maxwell, who was wrong-footed by a huge deflection off Paul Hanlon.

The Lions took just three minutes to double their advantage, with Sibbald curling home a sumptuous effort for his first Ladbrokes Premiership goal since March.

‘Sacked in the morning’ rang out from the delirious band of Livi fans, while the half-time whistle was met by a cacophony of boos.

However, Hibs responded after the interval. Allan was fouled inside the box by former Hibs player Marvin Bartley, prompting referee Gavin Duncan to point to the spot and the playmaker slotted home the penalty.

Hibs were afforded an almighty let-off in 75th minute when Tiffoney intercepted a James back-pass, rounding Maxwell and somehow managed to fire wide.

And Livi paid for that profligacy in the most dramatic fashion when Boyle returned from a four-month injury lay-off to burst through on goal and calmly slot in the leveller beyond Sarkic.