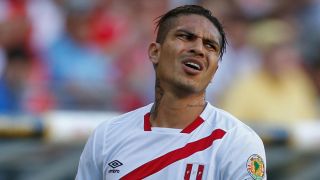 Paolo Guerrero has received the backing of his World Cup rivals, with the captains of France, Australia and Denmark asking FIFA to allow the banned Peru striker to play in Russia.

Guerrero is set to miss the World Cup following the Court of Arbitration for Sport's (CAS) decision to uphold an appeal from the World Anti-Doping Agency (WADA) to extend his suspension to 14 months after the Peru star tested positive for cocaine metabolite benzoylecgonine.

The 34-year-old – who had an initial one-year ban reduced to six months by FIFA – returned a positive drugs test following Peru's World Cup qualifier against Argentina in October 2017.

World footballers' union FIFPro contacted FIFA over the drugs ban and now Peru's opponents at next month's showpiece tournament have offered their support.

LATEST: National team captains of France, Denmark and Australia have today joined in asking to let Paolo Guerrero play in the . An official letter signed by Hugo , and Mile has been sent to . May 21, 2018

"Peru is returning to football's ultimate stage after a 36-year absence and we believe Paolo Guerrero should be allowed to lead his nation and celebrate what will be a career highlight," the letter read.

"Given the exceptional circumstances which pertain to this matter, we respectfully ask the FIFA Council to show compassion with Paolo Guerrero who has given his utmost for his national team since 2004 and has recently achieved one of the highest possible honours for any national team player – qualifying for the FIFA World Cup.

"In our view, it would be plainly wrong to exclude him from what should be a pinnacle of his career - an achievement he has worked so hard for, and for so many years - on the basis of a finding which confirms that he did not intend to cheat and did not intend to enhance his performance with prohibited substances.

"As such, we turn to the FIFA Council and kindly put forward an urgent request for clemency by asking the FIFA Council to temporarily interrupt the ban imposed on Paolo Guerrero during the 2018 FIFA World Cup in Russia, with the suspension to recommence at the conclusion of Peru's participation in the competition.

"We believe that in the interest of fairness and proportionality, and taking into consideration the exceptional circumstances of the present matter, Paolo who – as everyone agrees did not cheat – should be able to participate with, and against, his fellow professionals in the FIFA World Cup. As such, we strongly believe that a temporary interruption would be the equitable and rightful solution."

Guerrero is an 86-cap veteran for Peru, while he has scored 32 international goals – making him the country's all-time leading goalscorer.

Drawn in Group C at the World Cup, Peru will open their campaign against Denmark on June 16 before facing France (June 21) and Australia (June 26).