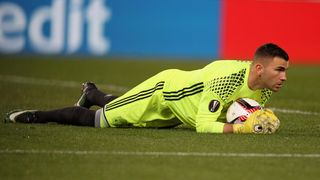 Lyon goalkeeper Anthony Lopes labelled his team's 4-1 loss to Ajax in their Europa League semi-final first leg as a "disaster".

The Ligue 1 giants are facing a huge battle to reach the final after being well beaten in Amsterdam on Wednesday.

Lyon started brightly enough before a Bertrand Traore brace and goals from Kasper Dolberg and Amin Younes left them in trouble in the tie.

Lopes, whose team had pulled back to 3-1 via Mathieu Valbuena, said it was a woeful result for his side.

"It's a disaster. We had intentions at the beginning of the match but they passed," he told the club's website.

"They have very technical players who make the right pass. We also have situations and we don't.

"There are reasons for hope. It's 90 minutes and we're going to have to go for 3-0 or 4-1. We must try to digest this disappointment first."

In a boost for Lyon, Alexandre Lacazette made his return from injury, coming off the bench for the final 14 minutes.

Lacazette said he was pain-free on his return as he lamented Lyon's heavy loss.

"This game is frustrating because we put them in trouble early in the game," he said.

"Afterwards, we stopped listening to the instructions of the coach [Bruno Genesio]... I told my team-mates I believe and I hope everyone will believe.

"I worked well and have no pain. I hope to start next Thursday."