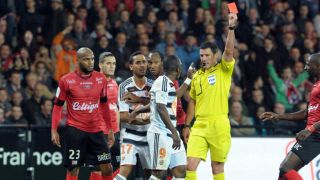 Lorient forward Majeed Waris claims he just wanted to "scare" Guingamp's Jimmy Briand with the kung fu-style kick that has landed him a six-match ban.

Waris reacted furiously to a challenge from Briand that went unpunished by the match officials in Saturday's 2-2 draw.

The Ghana international violently kicked out at Briand – an offence that would usually incur a two-match suspension under Ligue de Football Professionnel rules.

But Waris' rage continued and he kicked over water bottles before storming down the tunnel.

This prolonged discontent, which the 24-year-old insists is wholly out of character, led the authorities to opt for an extended punishment.

"This is the first time in my life that I have got angry like that, on the pitch or off it. I still wonder how I could respond like that, although there were causes.

"The guy [Briand] fouls me. He was not sanctioned and I have a bad reaction to severe tackles. I should not have done it, but I had no intention of hurting him or to 'kill' him. I just wanted to scare him."

Lorient host Troyes in Ligue 1 on Saturday and welcome leaders Paris Saint-Germain after the international break, while Waris will not be available until the Coupe de la Ligue tie against Dijon in mid December.