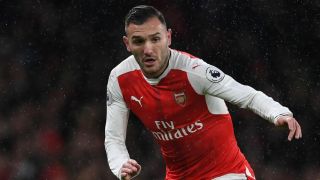 Arsene Wenger concedes that Lucas Perez may leave Arsenal in the close-season as he cannot promise the forward first-team football.

Perez made the switch to the Emirates Stadium from Deportivo La Coruna in August, but has been restricted to just 11 Premier League appearances – only two of those as part of the starting XI.

Reports suggest that Perez is clamouring for an exit from the Gunners in order to play more games and Wenger, while expressing his wish to keep the 28-year-old, admits the Spaniard's future is up in the air.

"If I am the manager I would love to keep him, but we have to sit down and see if he has a realistic chance to play," the Arsenal boss stated at a news conference ahead of Wednesday's contest at Southampton.

"He is a top-quality striker but I could not give him the games he wants and deserves, I confess that.

Perez, who has a contract with Arsenal until June 2020, has scored seven goals in 21 appearances in all competitions for the Gunners.