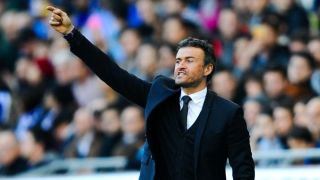 La Liga leaders Barca came from behind to edge the top-of-the-table clash at Camp Nou thanks to goals from Messi and Luis Suarez, although red cards for Filipe Luis and Diego Godin aided the hosts' cause.

Filipe Luis' straight red card came for a high tackle on Messi just before half-time, while Godin earned a second yellow for a wild lunge on Uruguay team-mate Suarez shortly after the hour mark.

A furious Luis Enrique clashed with Atletico staff following Filipe Luis' knee-high tackle on Messi, which happened immediately in front of the dug-outs, and the Barca boss was still angry after the game.

"You all saw my reaction, it was shocking," he told his post-match media conference.

As in Wednesday's Copa del Rey semi-final second leg against Athletic Bilbao, Barca were made to come from behind thanks to Koke's well-taken opener after 10 minutes.

While Barca improved after falling behind, Claudio Bravo's impressive save to deny Antoine Griezmann kept the champions ahead before Godin's red card.

"[Bravo's save] was important as the goals we scored," Luis Enrique added.

"The early goal shook us, but woke us up too, we went ahead but couldn't kill it off, the game was open right to the end.

"We were not able to close the game out sooner but we are spoiled in that if we do not win a match 4-0, it seems terrible, but nothing is further from reality."