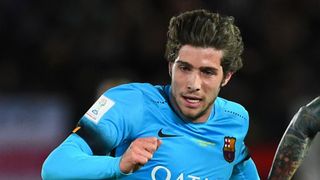 Luis Enrique believes Sergi Roberto has the potential to become a great full-back following his display in Barcelona's 2-1 win over Athletic Bilbao.

Roberto, who usually plays in midfield, has regularly appeared in the right-back slot this season but featured on the left side of defence for the trip to San Mames with Jeremy Mathieu (calf) and Jordi Alba (hamstring) absent through injury.

The Barca coach has been impressed by the 23-year-old's adaptability and thinks he could have a great future in defence.

"He is a player equipped to play in many positions. Today we saw him in another position," Luis Enrique said.

"It has been great because it cannot be easy having to defend against a player like [Inaki] Williams, who is very physical.

"Sergi has a very powerful physique and can become a great full-back."

Munir replaced Lionel Messi, absent with a knock picked up in Sunday's 6-0 win over Athletic, in the starting line-up for the Copa del Rey match at San Mames and made full use of his opportunity by opening the scoring.

Luis Enrique was pleased to see the young forward hit the back of the net again and hopes fellow Barca B graduate Sandro Ramirez can follow his example.

"I would have liked to give him minutes in a no pressure situation. No one doubts that he gives us many things," he added.

"I am happy that Munir has scored once again and Sandro will surely follow. They have excellent attitudes in training and are willing to help the team."

Neymar was also on target as both of Barca's goals came in the first half, but the coach was not so impressed by their performance after the interval.

"It was a difficult game, of course. We lacked fluency in the second half," Luis Enrique said.

"Regardless of the goal we conceded, I did not think the tie was secure. We go home happy, but [the second leg] next Wednesday will be interesting."