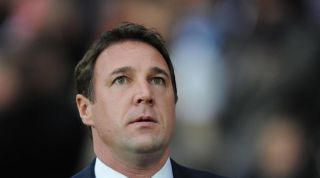 Mackay and former head of recruitment at Cardiff Iain Moody are alleged to have exchanged a series of insulting texts, reportedly uncovered in an investigation by the Welsh club.

Moody – who resigned from his position as sporting director at Crystal Palace on Thursday – and Mackay were both sacked last season by Cardiff, who were relegated from the Premier League in 2013-14.

Cardiff filed a dossier to the Football Association (FA), alleging misconduct between the two, and the reports leaked as Mackay was seemingly on the verge of taking on the vacant managerial post at Palace.

The FA confirmed to Perform on Thursday that it had launched a probe into the claims of misconduct.

The League Managers' Association (LMA) then released a statement later on Thursday saying that Mackay had "it seems" sent text messages that were "very regrettable and disrespectful of other cultures".

But Mackay took part in a television interview on Friday to apologise in  further explain his side of the story.

"The texts are something that I absolutely have to deal with and explain," he told Sky Sports. "Out of 10,000 text messages in and out of someone's phone, I sent three.

"That being the case, looking at them, they are completely unacceptable, inappropriate, and for that, and any offence I've caused, I sincerely apologise.

"That's something I did and there is no excuse for that.

"I did it in a period where I think was under immense pressure and stress in terms of the relationships that were possibly not going too well at my football club at the time.

"But once again, that doesn't actually excuse anything.

"I'm a manager, I'm a leader of people, and it should not have happened. But before all that and foremost, I'm a human being and I made a mistake.

"I would humbly ask people to ask themselves the question that, if their own mobile phone was taken and lifted and every private text was scrutinised, there would certainly be an amount of embarrassing texts there for everyone.

"But at the same time, it was something that was unacceptable.

"As far as I'm concerned, I've been in a multi-cultural football environment for 20 years and I love British football.

The LMA apologised on Friday for describing the exchanges as "friendly text message banter" in its initial statement, but Cardiff have now called twice on chief Bevan to resign over the incident.

Mackay, however, disagrees with that viewpoint.

"I think if you ask every manager in this country and most of football in this country the amount of work Richard Bevan and the LMA have done and the good that they've done for the country in terms of different organisations and grass roots football and management and coaches, then I think you'll find he's been someone that has made a lot of good decisions and done a lot of good work for people in the country in terms of football," he added.

Quizzed on whether the FA investigation would uncover any wrongdoing relating to transfer activity during his time at Cardiff, Mackay insisted: "There's an FA investigation going on at the moment and I'm 100 per cent confident that the investigation will show I am guilty of absolutely no wrongdoing in terms of transfers at the club. Secondly, I signed a non-disclosure agreement with Mehmet Dalman at Cardiff City and I have to hold my end of the bargain up.

"I have to comply with the FA in this investigation to the letter of the law. Anything they need from me, I'll be available here. What I've done is made a mistake. I sincerely apologise for that. These are testing times but I've got values and resilience.

"I will come back from this."