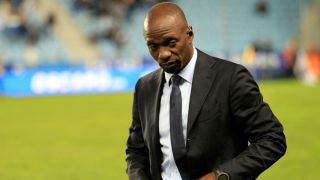 The Ligue 1 side announced the appointment of the ex-France international on Thursday, describing his role as one of assisting vice-president Vadim Vasilyev in the running of the sporting side of the club.

"I'm very happy to join an important club in French and European football," he told the club's official website.

"It's a new phase of my career and I'm convinced that the new role of technical director suits me perfectly and will allow me to keep developing.

"I'm very excited at the idea of working with a coach of the quality of Leonardo Jardim.

"AS Monaco looks at Champions League qualification every year and I'm going to work to help them achieve their objectives."

"It's a great pleasure to have a man of the quality of Claude Makelele at my side," added vice-president Vadim Vasilyev.

"It was important to have an every-day professional to serve as a link between the sporting group and the club directors.

"This new organisation should help to allow AS Monaco to take new steps and satisfy our long-term goals."

Makelele, who won league titles in France, Spain and England in a glittering playing career, was sacked as head coach of Bastia in November 2014 after leaving an assistant role at Paris Saint-Germain.