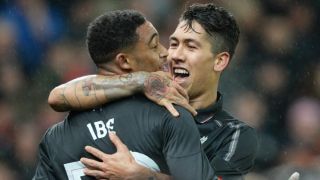 Reaching the League Cup final could give Liverpool the boost they need to finish in the Premier League's top four, according to former captain and boss Graeme Souness.

Souness won the competition in four consecutive years as a player with the Reds between 1981 and 1984, and managed Blackburn Rovers to success in the tournament in 2002.

Liverpool, whose eight League Cup titles is a record, hold a 1-0 aggregate lead over Stoke City going into the second leg of their semi-final tie at Anfield on Tuesday.

Souness is confident they will finish the job and thinks making the final at Wembley will also boost the Champions League qualification hopes of Jurgen Klopp's side.

"What I would hope to happen - and I think all the managers will see it that way - if you get to the final, the momentum between now and the final will give a feel-good factor around the club," he told Omnisport.

"Everyone's tail is up, and you would hope results in the league would kick on. Even Stoke - although they won't talk about it – they will be thinking that if they put a run together, they could get into the top four.

"So there is a lot to play for and I think it might be Liverpool's best opportunity [to win a trophy] but I wouldn't say the semi-final is a foregone conclusion playing Stoke, who have a good away record.

"If you look at both managers, Jurgen Klopp is going to be more uncertain on what he gets on the night than Mark Hughes will. He is more sure of what he is going to get from his group.

"You have to say Liverpool - at home - would start favourites, 1-0 up, playing in front of the Kop. You have got to fancy your chances in that situation."

Souness feels consistency is what has been lacking from Liverpool - who are seventh in the Premier League after Saturday's thrilling 5-4 win at Norwich City - throughout 2015-16.

"Liverpool have been up and down this year, they have had some fabulous results, just not enough of them," the Scot, who managed the club between 1991 and 1994, added.

"I am thinking particularly the 6-1 demolition of Southampton and the way they played that night, but they have had some pretty ordinary performances as well."