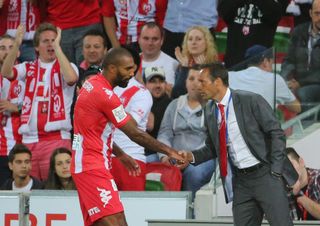 The Dutchman, Heart's inaugural coach, took over from the sacked John Aloisi with the team winless after 12 rounds of the A-League season. They finally got off the mark with a victory at home to the Newcastle Jets on January 15, before embarking on a seven-match unbeaten run.

That sequence came to an end with a 1-0 loss away to the Jets on March 8, but not before pride was restored to the club, with an unlikely push for a finals berth even appearing possible at one point.

Since his return to the top job, news emerged that the club had been purchased by the owners of English Premier League giants Manchester City.

And with considerable upheaval surely ahead for Heart on and off the field, the new regime opting to retain Van 't Schip is a major endorsement of the 50-year-old, who is now contracted to the club until the end of the 2016-17 campaign.

"Playing good football is at the centre of our plans for the future of the club and John has already demonstrated his ability to help us achieve that ambition."

Van 't Schip's status as a former Ajax star with close links to Johan Cruyff is sure to have appealed to the likes of Soriano and City's director of football Txiki Begiristain, who share a Barcelona connection with Dutch great.

"The club is well positioned for the future and I am excited to be working with (City managing director) Brian (Marwood) and Txiki Begiristain in the lead-up to 2014-15 season."