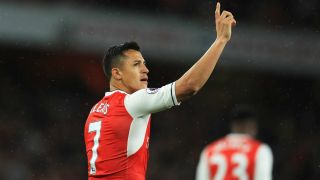 Arsenal know what they must do to keep Alexis Sanchez, even though suitors Manchester City, Bayern Munich and Paris Saint-Germain can give him what he wants, according to Emmanuel Petit.

Petit feels Arsenal desperately need to keep Sanchez due to the leadership he provides to Arsene Wenger's side and suggested they have a way to persuade the forward to stay.

But the Chile international faces a hugely uncertain future, with only one year left on his contract at Emirates Stadium and no breakthrough with renewal negotiations.

Petit's concern is that City, Bayern and PSG can provide Sanchez, who last season spoke of his frustration at not competing for major trophies, with what he is looking for both on and off the pitch.

"I would love him to stay at the club as he is the boss in this team, he is the leader and he's got the winning mentality," Petit said to Sky Sports about Sanchez, who is preparing for the Confederations Cup with his national side.

"I wish Arsenal would keep him and he stays at the club but he's getting interest from Man City, Bayern Munich and PSG [who] are willing to buy him and offer him what he wants on and off the pitch.

"Arsene and Arsenal know what they have to do to keep him."

Petit, a Premier League winner with Arsenal in 1998, believes Wenger is ready to change his typical approach and spend big money in the close-season.

He thinks that will produce a title challenge after the Gunners slipped to a fifth-place finish last season, the first time in 20 years they failed to reach the Champions League.

"I'm sure Wenger and Arsenal are willing to change things by putting money on the table to bring in players with a winning mentality," said Petit.

"I'm sure some players will come in soon and next season will be totally different for Wenger and Arsenal.

"They are one of the richest clubs in the world. Financially they have got no problems so if you don't put the money on the table then you need the academy to help the first team.

"But with the likes of Theo Walcott, Jack Wilshere, Alex Oxlade-Chamberlain and Aaron Ramsey we don't see many of them in the first team other than Rob Holding.

"That's not enough, you need a winning mentality and this is something rare in football."