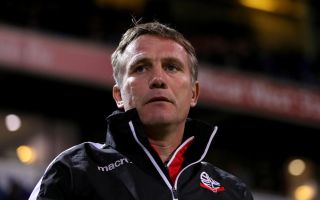 Phil Parkinson has resigned as manager of Bolton, adding to the chaos engulfing the Sky Bet League One club.

Parkinson, who had been at the helm for just over three years, and his assistant Steve Parkin have quit as off-field problems continue to dog them.

Bolton, who started the campaign on minus 12 points and postponed their game with Doncaster on Tuesday night, say they are considering the resignations.

A spokesperson for Bolton told the PA news agency: “The club has received the notices of resignation from manager Phil Parkinson and assistant manager Steve Parkin and the matter is being considered.”

Wanderers are awaiting the completion of a takeover by Football Ventures which had been blocked by a court order issued by Laurence Bassini, who had tried to buy the club earlier this year.

And as the issue rumbles on, Wanderers have been hit on the pitch as they have been forced to field a team full of youngsters in their first few games.

After they were beaten 5-0 at Tranmere on Saturday, Wanderers postponed their game with Doncaster on Tuesday night as they thought playing the youth team again “would be detrimental to both their welfare and development”.

Parkinson was in charge of 156 matches and led the team to League One promotion in 2018, having spent the entire season under a transfer embargo.

He kept the club in the Championship for two years, but was involved in a constant battle with off-field drama at the club.

The 51-year-old had hoped the proposed takeover would have been done and dusted well before the season started but once it was blocked by Bassini, Parkinson felt his time at the club was done.

Wanderers are due to play Ipswich on Saturday.