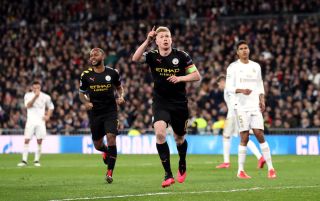 Manchester City produced a stunning late comeback at the Bernabeu to claim a 2-1 win over Real Madrid in the first leg of their Champions League tie.

Gabriel Jesus and Kevin De Bruyne, the latter from the penalty spot, both struck in the final 12 minutes to give Pep Guardiola’s side a brilliant victory after falling behind to an Isco strike.

To make matters worse for Real, captain Sergio Ramos was sent off in the closing stages for denying Jesus another goalscoring opportunity.

City had gone into the last-16 encounter under a cloud after recently being banned from the competition for the next two years.

That issue will continue to overshadow their immediate future but their fine display under pressure in Madrid at least breathed new life into their current campaign.