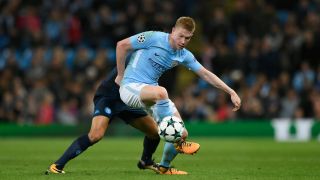 Kevin De Bruyne insists individual accolades will mean little to him unless Manchester City are able to claim major honours this season.

Pep Guardiola's Premier League leaders continued their superb start to the season on Tuesday with a 2-1 victory over Napoli, making it three wins out of three in the Champions League.

De Bruyne, who was named Bundesliga Player of the Year for 2014-15 when he was at Wolfsburg, has been City's standout performer thanks to a succession of dazzling midfield performances and eye-catching assists.

But since becoming the club's record signing in August 2015, the solitary winners' medal the 26-year-old Belgium international has collected was for the 2015-16 EFL Cup.

He was injured for that penalty shoot-out triumph against Liverpool at Wembley and being viewed as a front-runner for England's top individual awards this season is not causing De Bruyne to lose sight of the bigger picture.

"It's nice to have it but I prefer it after we have a title," De Bruyne told ESPN FC.

"When I got it in Germany, it was a great honour but I wasn't happy that before we won the cup in Germany, we were second in Germany at the time.

"After that if you win it, it's a great recognition. It means that it will be forever there and that you did well."

De Bruyne's pinpoint low cross created Gabriel Jesus' ultimately decisive goal against Napoli and City were scintillating in their early domination before the Serie A leaders battled back.

Napoli boss Maurizio Sarri said afterwards City should be considered among the frontrunners for the Champions League, despite only once previously progressing beyond the last 16.

"Are we the best? It's difficult to say. For the moment we have good form, probably we are up there," De Bruyne said.

"But it's so difficult to compare with other teams from other leagues. It's not for me to do that discussion."

That City are being mentioned in such terms owes much to De Bruyne's stellar form but the ex-Chelsea man is keen to share the credit around.

"I'm just growing on what I've done the last years," he added. "I was playing constantly at a good level but I think the team is now playing at a very high level.