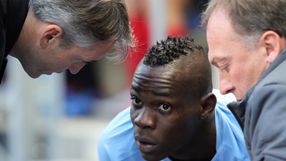 Manchester City striker Mario Balotelli must change his attitude if he wants to reach his potential in the Premier League, manager Roberto Mancini said on Friday.

The Italy forward, who made an August switch from European champions Inter Milan, will miss Sunday's trip to Fulham as he serves the final game of a three-match ban following his dismissal at West Bromwich Albion.

"He was the same in Italy, and he must change his mentality," Mancini said. "He must think to play, because he could score in every game if he concentrates on what he is doing.

"He must not keep talking back to the referee and think only about his job, then he can make a difference on the pitch."

City could be without Micah Richards (rib injury) and Joleon Lescott (foot) but Mancini said goalkeeper Joe Hart was likely to recover in time from the back injury he sustained this week in England training.

Wayne Rooney could make his first appearance for Manchester United since signing a new contract against Wigan Athletic on Saturday.

The striker, who has been undergoing intensive fitness work in the United States, has not played since October 16.

"We need to assess that a little more closely. He could make the bench, but I don't think he'll start."

Defoe has been out for more than two months since damaging ankle ligaments playing for England against Switzerland at the beginning of September. Lennon has missed Spurs' last three matches with a hamstring injury.

"Jermain has trained all week and will be in the squad. It's great to have him back. He's a fantastic goalscorer... a great finisher," manager Harry Redknapp told reporters at the Spurs training ground. "Aaron Lennon has trained and should be available."

Arsenal's 18-year-old midfielder Jack Wilshere will undergo a fitness test on Friday, along with Andrei Arshavin and Tomas Rosicky.

"He (Wilshere) has a little strain of a little muscle in the back and is not in full training at the moment," manager Arsene Wenger said on the club website.

"We will know more on Friday about whether he is available for Saturday.

"We have to assess Arshavin, who has still to come back (from international duty). Rosicky is coming in later too. He had a tight hamstring but should be okay."

Arsenal could go top of the table with a victory over their oldest and bitterest rivals who have not won at Arsenal since May 1993.