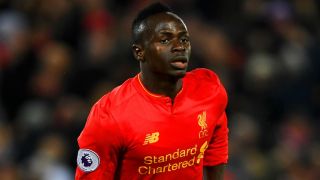 Sadio Mane has issued an apology to Manchester City goalkeeper Ederson after he was sent off for catching him with a high boot.

Mane was dismissed with Liverpool trailing 1-0 to Sergio Aguero's opener at the Etihad Stadium and Jurgen Klopp's side went on to collapse to a 5-0 defeat after he was sent off by referee Jon Moss.

The Senegal winger had both feet off the ground as he challenged for a high ball with Ederson outside the box, with the Liverpool man's studs catching him in the face.

And Mane, who faces a three-match ban as Liverpool do not plan to launch an appeal, later apologised to Ederson via social media, although he stressed there was no malice or intent in his dangerous challenge.

"I hope and wish Ederson a quick recovery," Mane wrote on his Facebook page.

"I am so sorry he was hurt during our accidental collision on the pitch and am sorry for him that he could not complete the match because of it. I pray he heals fast and is back playing very soon."

Although there was a lengthy delay as Ederson was treated on the pitch, the Brazilian's injuries are thought to be relatively minor, with Pep Guardiola confirming no bones were broken in the incident.

After the game, Ederson tweeted: "Hi, everyone - I am well. What a fright! It was an important win for us. We are strong. Thanks for all your messages of support."