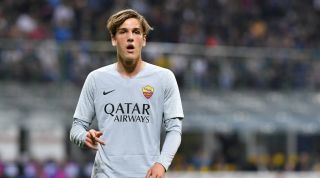 The 19-year-old midfielder has been one of the breakout stars of the season in Serie A, scoring four goals for the capital club and earning two Italy caps.

Spurs have reportedly put the Italian at the top of their summer wish list and Zaniolo’s agent Claudio Vigorelli revealed that he has spoken to several teams about a potential sale.

However, Vigorelli underlined that the midfielder’s preference would be to agree a new deal in the Italian capital.

“I can only confirm our willingness to sign on with Roma,” he told Il Romanista.

“I believe, however, it’s clear and understandable to everyone that there’s a need to restructure Nicolo’s contract.

“I don’t think I’m a visionary in saying that compared to 12 months ago, the lad’s outlook has changed profoundly.

“Needless to say that for some months now, I’ve been getting a lot of phone calls from many big clubs, expressing a willingness to buy him, but I won’t say who.

“Nicolo, however, is only focused on Roma and getting fourth place. I’d talked about him before to Monchi and then (Roma sporting director Frederic) Massara.

“We’d promised to talk again after Easter or at the end of the season at the latest. Now all we have to do is wait for the Giallorossi to call us.

Quiz! Can you name the PFA Premier League Teams of the Year from the last decade?

Virgil van Dijk exclusive: “I’m not going to lie, I was pretty scared – I could have died”