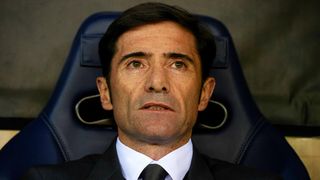 Villarreal coach Marcelino was pleased with his team's performance in a 2-1 win against Sparta Prague in the first leg of their Europa League quarter-final on Thursday.

Marcelino was "extremely satisfied" after a Cedric Bakambu brace gave his side a slim victory to take into next week's return leg, although Jakub Brabec's away goal could be pivotal.

The Spaniard cited the numerous chances his side created, with Sparta goalkeeper David Bicik making a string of excellent saves to make amends for the mistake that handed Bakambu an early opener.

"Today I think that we have done everything right for less [goals than we could have scored], but we are extremely satisfied with the game," Marcelino said after the match.

"Surely we expect a hard game next week, but we won't go there with any fear.

"We've had 27 shots, 12 clear chances. The result is close but we are very pleased with the play of the team.

"To get through the round we have to play well next week in Prague, as we have done today."