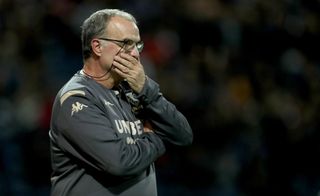 Marcelo Bielsa has played down the delay over his new contract at Leeds after confirming he will be head coach for their first season back in the Premier League.

Bielsa guided Leeds back to the top flight in July after a 16-year absence and although the club have insisted a new contract is imminent, an agreement has not been formally announced.

Leeds play their first top-flight game since 2004 at champions Liverpool on Saturday evening and fans have grown increasingly anxious over the delay.

“I will be working next season with Leeds United,” Bielsa said. “Everything has been sorted and it’s definite that I will be here next season.”

Speaking remotely via a new translator, the Argentinian refused to elaborate on why talks over an extended deal had taken so long.

“Like in every negotiation, nothing is done until it’s actually done,” he said.

“There’s nothing of importance. I’ve been working 100 percent since the promotion celebrations were finished.”

Bielsa, whose press conferences last season were often enlightening and humorous, was in no mood for extensive chat on any subject ahead of his first venture into the Premier League.

Bielsa said Saturday’s visit to Liverpool would be “a very special game”, but added: “Anfield is only Anfield if it is full.”

The opening-day clash evokes memories of when the two sides regularly crossed swords in the challenge for major honours.

“They are one of the best teams in the world, with a fine system and very good players,” he said.

“It’s difficult to say how our players are going to adjust to the Premier League. We have prepared for this, but we need to show it on the pitch.”

Leeds overran most of their opposition on their way to winning the Championship title by a 10-point margin.

But critics have questioned whether his side’s high-intensity, all-out offensive approach will yield results in the top flight.

“To begin with we will try to play the same way,” Bielsa said.

✍️ #LUFC are pleased to announce the signing of Robin Koch from Bundesliga side SC Freiburg— Leeds United (@LUFC) August 29, 2020

“They are in very good physical condition ahead of the game,” said Bielsa, who confirmed all his players bar Adam Forshaw (hip) were fit.

“The championship officially starts in two days’ time and the team is at the adequate fitness levels to start the first games.”

Bielsa chose not to shed light on any further possible new arrivals, adding: “If there are to be any more new signings we will let you know in due time.”