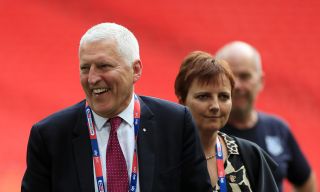 Former FA chief executive Mark Palios has warned EFL clubs the financial impact of the coronavirus pandemic could be even greater than the £200 million blow first feared.

EFL chairman Rick Parry estimated the cost of the shutdown earlier this month but Palios, also chairman of League One Tranmere, believes the sum will continue to grow.

And he called for more talks between the EFL and the Professional Footballers’ Association, and a relaxation of the league’s rules governing administration, in a bid to mitigate the effects.

Speaking on ‘Ridge on Sunday’ on Sky News, Palios warned: “Whilst you may look at the ‘hole’ which has been articulated as £200 million to September – I think it’s bigger than that.

“There is a real financial maelstrom coming towards the league at this point in time.

“I personally believe we haven’t seen the worst of it yet, and during the course of the summer you’ll see a lot more financial stress on the clubs as we move onwards and continue to pay wages.

“I think what you’ll see is a lot of clubs will stumble down the road to insolvency. You might see people getting high court orders against them. They’ll bumble on for a period of time.”

With League One clubs still struggling to reach a consensus on completing the season, Palios repeated his belief that relegation should be scrapped in order to help ease the financial burden.

Tranmere are currently in the bottom three and Palios insisted: “We don’t want to have a decision foisted upon us that is going to affect us financially. Why would you.. in terms of certain clubs, foist on them an even worse position?”

Palios also proposed a clarification of EFL rules regarding clubs which enter administration, although the current points deductions can be appealed on the basis of so-called ‘Force Majeure’ events.

He added: “This is a consequence of a pandemic, so I think they need to be considering that clubs may need to go to the protection of administration.. it is a rescue procedure, and I think it needs to be modified for the circumstances of the pandemic.”

Huddersfield chairman Phil Hodgkinson has painted an even bleaker picture by suggesting up to 60 clubs could go bust – and he insists the sport only has itself to blame.

Despite insisting the Terriers are in a good place to survive the crisis, Hodgkinson said he fears for the future of smaller clubs which face escalating costs at the same time as a significant drop in income.

He told the Yorkshire Post: “Let’s not pretend that football didn’t cause this problem, it did. Football has created the position we are in. What we have now is the opportunity, with this COVID-19 pandemic, is to get football back into a place where it’s run better.

“Football has caused this problem and football should fix it. If this isn’t solved, you could be looking at 40, 50, 60 clubs in the pyramid ceasing to trade within the next six to 12 months; that’s how big this problem is.”