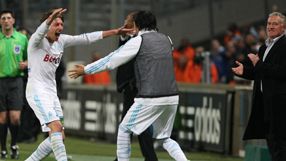 First-half goals by Gabriel Heinze and Andre Ayew helped Marseille move up to second in the standings, four points adrift of pacesetters Lille who won 2-1 at Brest on Saturday.

Didier Deschamps's side made up for their Champions League elimination against Manchester United on Tuesday by leapfrogging Stade Rennes and Olympique Lyon, who cancelled out each other in a 1-1 draw at Gerland stadium on Saturday.

"Technically and tactically, we have qualities. We needed a good state of mind after the United game," Marseille midfielder Benoit Cheyrou told Canal Plus.

"It's not going to be easy but if we keep that state of mind we can go all the way."

The result was a massive blow to PSG's title hopes as the club from the capital was left in fifth place 10 points off the pace. "They were not that dangerous, but they were efficient and we were not," said winger Ludovic Giuly.

PSG coach Antoine Kombouare's decision to leave keeper Apoula Edel on the bench following a string of blunders and replace him with former French international Gregory Coupet did not change much.

Coupet left a huge gap to his right as Heinze converted a free-kick that gave Marseille the early lead after 16 minutes.

However the visitors hit back in the 27th minute when Nene benefited from a bad clearance to unleash a low shot that smashed into the post and Clement Chantome, following in, swept the ball past Steve Mandanda.

But Marseille were clearly the better side and Ayew headed home 10 minutes before half-time from an Andre-Pierre Gignac cross to give OM a well deserved advantage.

PSG stepped up a gear but Nene missed the target from close range before the break and Guillaume Hoarau was superbly denied by Mandanda 12 minutes into the second half.

Earlier, Monaco's woes continued with a 1-0 home defeat against AS Nancy that left the club from the principality in the relegation zone in 18th place, three points from safety.

"We'll now have to go to war if the want to stay in Ligue 1," Monaco keeper Stephane Ruffier told French TV channel Foot Plus.