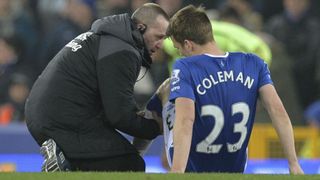 Roberto Martinez believes Seamus Coleman will be out for three to four weeks with a calf strain suffered in their 2-1 League Cup semi-final first-leg win over Manchester City.

Lukaku's winner came after Ramiro Funes Mori's opener had been cancelled out by Jesus Navas' strike two minutes earlier and Everton hung on to win despite playing the closing stages with 10 men due to Coleman's injury.

Midfielder Tom Cleverley was also forced off with a calf problem while Lukaku hurt his ankle in the act of scoring.

"Seamus Coleman's injury is the most serious of the three. Cleverley had a calf problem that flared up at half-time," Martinez told a post-match media conference.

"Rom will be assessed. I don't know if he'll be available for the weekend [FA Cup clash with Dagenham and Redbridge], but I don't expect it to be too serious."

Assessing his team's performance, Martinez told Sky Sports: "The character we showed was incredible, the most pleasing aspect of the performance.

"For that period [with 10 men] to be able to manage the game, the reaction after conceding, was very pleasing.

"It means nothing. It is the first leg we had to win and now we prepare for a very interesting second leg."