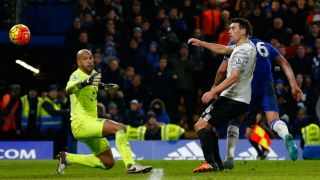 Roberto Martinez hit out at referee Mike Jones for the "diabolical decision" of allowing John Terry's 98th-minute goal to stand and earn Chelsea a 3-3 draw with Everton.

Substitute Ramiro Funes Mori looked to have won the game for Martinez's side when he scored in the 90th minute, but there was still time for Terry to restore parity.

The Everton coach was furious that the game had gone beyond the allotted seven minutes of stoppage-time - the figure settled on following an injury to Bryan Oviedo - and that an offside against the Chelsea centre-back from Oscar's flick-on went unnoticed.

"It was a fantastic game for the fans, but the level of refereeing was diabolical. That's really hurtful and no-one deserves that," Martinez said on Sky Sports News.

"It's down to the decision and anyone from Chelsea would tell you that was offside. It's also well over the [allotted] time.

"We scored two very good goals, get a two-goal lead and then it goes a bit frantic and opens up.

"Getting to that point and showing that character, that incredible resilience to get that winner – that's what we deserved, but it's been taken away in an unfair manner."