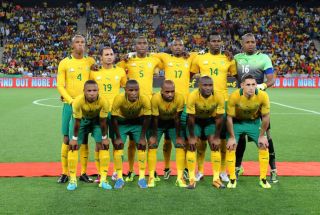 Mashaba steps up from managing the under-23 and under-20 teams to regain control of the senior side, having formerly coached them from 2002 to 2004.

Igesund's contract with Bafana Bafana was not renewed after two years in charge and another ex-South Africa boss, Carlos Queiroz, had been linked with the vacancy.

"The appointment of Shakes Mashaba was a unanimous decision by the NEC [national executive committee]," said Jordaan at a media conference.

"We ask for patience from the public and the media. Let us watch Shakes grow into this role."

Mashaba added: "First of all, I would like to thank the SAFA NEC for the confidence that they have demonstrated in me. This is a massive but exciting test. I am elated and ready for the challenge.

"I will do all my best to bring back the winning mentality within Bafana Bafana. With the support of all South Africans, the goal of taking Bafana Bafana back to the top is very achievable."

The 63-year-old's first spell ended in controversy when he was sacked a day before the 2004 Africa Cup of Nations, having left key players like Benni McCarthy and Mark Fish out of his squad for the tournament.

Mashaba will now be tasked with leading South Africa to the 2015 Africa Cup of Nations in Morocco.