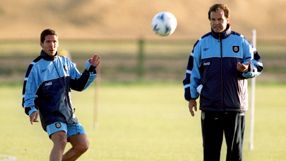 Atletico swept aside Valencia with a 5-2 aggregate semi-final victory on Thursday and will meet Bilbao in Bucharest on May 9, after Bielsa's team edged out Portugal's Sporting in a 4-3 thriller.

Former Argentina captain Simeone played the last 30 of his 106 international appearances during Bielsa's six-year run at the helm between 1998 and 2004.

"We get to meet up again with Marcelo, with El Profe (the professor)," Simeone told reporters.

"We have a great affection for each other. It will be a nice final between friends but reaching the final was only the first objective. We want to win."

Argentine Bielsa, nicknamed 'El Loco' (the madman), is well-known for his love of attacking football, his philosophical musings and as one of the influences on Barcelona coach Pep Guardiola's style of play.

He led outsiders Chile to the last 16 of 2010 World Cup finals in South Africa.

Brought in to coach Bilbao at the beginning of the season, Bielsa has turned the north-coast club, who only field players of Basque origin, into one of the most exciting teams in Europe.

They knocked out Manchester United on their way to the final and have already booked a place in the King's Cup final where they will meet Barcelona on May 25.

Simeone, who turns 42 on Saturday, was appointed to replace Gregorio Manzano at Atletico in December and was treated as a returning hero for his part in helping the club to win a league and cup double as a player in 1996.

Relatively untested as a coach since starting out in 2006, he had short spells with Argentina's River Plate and Racing among others, and Catania in Italy before moving to La Liga.

Although more pragmatic in their style of play, Atletico are the leading scorers in the Europa League this season with 30 goals and capable of the same kind of intensity as Bilbao on their day.

They are level on points in La Liga with one win each in their direct meetings.

Simeone's animated touchline presence is similar to Bielsa's and he often looks as if he is about to lunge on to the pitch as he might have done when he played as an uncompromising defensive midfielder.

Against Valencia he did actually enter the field of play to break up a mass scuffle when his player Tiago was sent off for slapping Valencia's Roberto Soldado.

"I'm like this, very spontaneous," Simeone told reporters. "I didn't want any more of my players sent off."